written by: Lou Whitmire
originally published by the Mansfield News Journal - you can read the original article here.

Campaign chairman Rick Taylor said 10 Pacesetter companies and Pillar donors have already raised $611,000 or 43% of the new campaign goal. The 2020-21 Campaign is also being called the Centennial Campaign as this year marks the 100th anniversary of United Way's predecessor, the Community Chest of Mansfield. 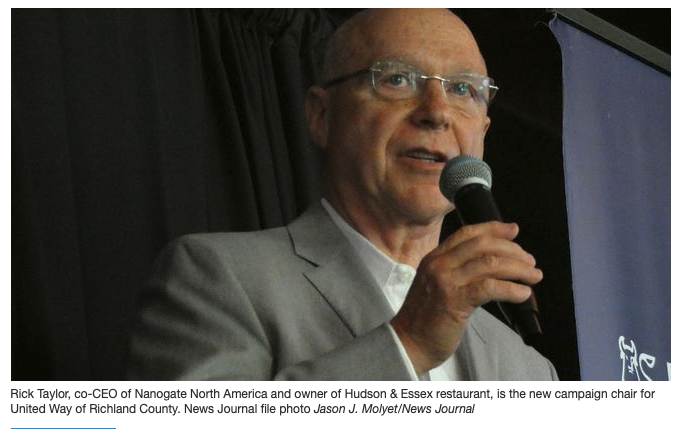 Rick Taylor, co-CEO of Nannogate North America, and the owner of Hudson & Essex restaurant, challenged the community to raise $1.5 million for local agencies.

Kristie Massa of Park National, who heads the Power of the Purse event, said the event, which was strictly online, raised over $32,000. She said the 2021 event and auction will be "fingers crossed" held June 3 in person.

Ontario Superintendent Lisa Carmichael announced the Gus the Gopher stuffed animal friendly competition among local school districts for the Gopher award returning to Mansfield City Schools for an increase of more than $5,000, the biggest increase of all the school districts in last campaign. They would've been recognized in March had it not been for the coronavirus and social distancing.

Stan Jefferson, Mansfield City Schools' superintendent, accepted the gopher and said a community can never pay back but can always pay forward in giving to the Richland County community.

Dan Varn, executive director of United Way of Richland County, thanked everyone who supported the community in one way or another -— including companies and individuals.

He said he wanted everyone to be together, thus the parking lot gathering on Tuesday during which guests sat in their vehicles and listened to the press conference on the radio.

"We know this is going to be a challenging year but we know we can do it," Varn said. "And we're excited to do it and I think $1.5 million is absolutely possible and we're going to race and chase toward it."

United Way of Richland County reached its goal for the third year in a row.